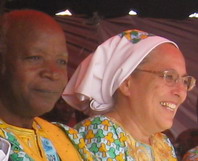 Daniel and Anne Kompaoré           Anne Garber Kompaoré              Beautiful long-tailed sunbird
August 30, 2010
01 BP 1632 Ouagadougou 01 Burkina Faso
Skype contact: annegk1, Personal website: http://www.aegk.finespun.net, also on Facebook
Email: agkompaore@gmail.com, agkompaore@mennonitechurch.ca
Telephone: 011-226-50-34-28-07 or (cell) 76 41 12 55
My goodness! It has been a whole year since I last wrote!  This week will mark the first anniversary of the big flood in Ouagadougou which I reported on last year. Since then, so much has flowed under and over the bridge. We have heard of even worse floods in various parts of the world, the most recent one being in Pakistan. And as we near the end of the rainy season here in Burkina, we hold our breath. There have been a few flash flood incidents, but nothing like last year. The Ouagadougou city authorities have been working hard at digging more gutters but they still have a long way to go. After every big rain the empty space behind our property becomes a rushing river. A few weeks ago, it knocked down yet another part of our wall, rushed to the end of the property and knocked down another 10 meter stretch on its way out. We REALLY hope that the city finds a way to rechannel all that water sometime in the coming year!
Marking the event - Pomp and Ceremony
Us Mennonites tend to avoid 'standing on ceremony'. But here in Burkina, ceremony is very important. For me, I have a tendency to say, why all the expense and time, sitting through speeches, listening to songs, and going through all kinds of formalities? The local T.V. news, almost every night, is filled with pictures of dignitaries sitting through one ceremony after another, giving a few words in an interview for the value of such and such an activity, and I just can't help thinking what a boring life they must lead!  I have plenty of other things to do. But I am slowly learning that not all is waste. Here are a few of my own recent experiences.
In the first week of November, 2009, I helped to lead a first time workshop in Orodara for reviewers of the Siamou translation project. At the end of the week, my colleague Paul Thiessen organised a closing ceremony to which he invited local church leaders. Paul started out by giving many lavish and formal thanks to all whom had contributed to the Siamou work in one way or another, I gave a brief summary of what had been done during the week, and one person spoke on behalf of the participants giving many flattering remarks about all that they learned.  Then Pastor Abdias spoke on behalf of the Mennonite church and formally 'closed' the workshop. Afterwards there was a little reception with soft drinks and chicken, with the honoured guests and workshop leaders sitting separately from the participants. During the reception time, the guests started talking about the needs for evangelism and language development for the Siamou people. It was exciting to hear people sharing their vision for this people, and it was that closing ceremony that brought them together. It was also a very wonderful time where each party affirmed in a public way, the contributions of the other.
In the last week of November, 2009 was quite another and much more grandiose event, but this time with Daniel's church in Ouagadougou. It had been 50 years since Daniel's father and several other pastors had been pushed out of the Assemblies of God church - the first Protestant church in Burkina Faso. In fact, Daniel's father had been their first ordained pastor. It had been a very painful time, and these pastors began meeting together with their families and friends and formed a new group, which was eventually called the Apostolic Mission Church. After years of effort, they were finally recognized officially by the Federation of Evangelical Missions and Churches FEME some time ago. They slowly grew and multiplied into several dozen congregations in various parts of Burkina Faso today. When Daniel became president of the denomination in 2008, his first dream was to celebrate 50 years of the Apostolic Mission Church. It was a time of remembering the pain, but mainly a time of rejoicing for the healing and reconciliation that had taken place.
Many thousands of dollars were collected to celebrate this week long celebration, culminating in a huge outdoor Sunday morning ceremony. Protocol had all of the important dignitaries sitting up front facing the congregation - not only leaders of other denominations including Assemblies of God, but also government leaders. I was made to sit up front beside my husband in the front row. Beside me was the president of the FEME; on the other side of Daniel sat the Prime Minister of Burkina Faso, along with his wife, and the President of the General Assembly of deputies; and behind us Ministers of the governement, the brother of the President of the country, the Mayor of Ouagadougou, and one well-known opposition leader who long ago had been on staff with Daniel at the National School of Administration.

The Prime Minister, who is an evangelical Christian himself, was given a few minutes to speak, not missing the opportunity to emphasize that leaders, chosen by God, are also called to govern responsibly before God. Among the many choral offerings, there was one unforgettable hymn given by the children's choir. Everyone was invited to stand up, and the children began singing the ... national anthem!? But wait a minute! What were those words I hear? Yes the melody was the national anthem, but the words were solely and entirely in the praise and allegience to our great high God!  Instead of singing praise to our dear Burkina Faso, we were singing praise to God, but also implicitly saying we as citizens of Burkina Faso, are called to worship God first and foremost. What a powerful combination!  Afterwards, the organiser told me they had procured special permission to change the words for this special occasion. The entire event was bathed in joy and celebration, and the government leaders sat through it all, and ate with us at the end, without seeking to rush away to their next ceremony.
As if all that was not enough, Daniel's youngest son finally decided to tie the knot on Dec. 19, 2009. Now Claude was trying to avoid all that pomp and ceremony by getting married out of town, but he was told that his dad was such a public man, he had to have it in his uncle's townhall (his uncle is the mayor of Ouaga), followed by the church ceremony including praying for the couple by the laying on of hands by all of the pastors in the assembly (there were about 15 or so), and finally a packed reception at our place.  May God give them many happy years together! 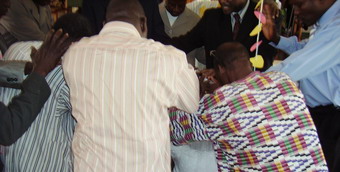 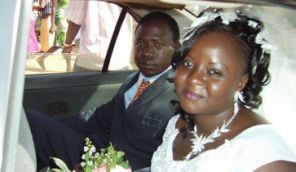 Pastors Praying for Claude and Olivia               Mr. and Mrs. Claude Compaoré
This year is the 50th anniversary of the independence of Burkina Faso from colonial powers. And like in so many other African countries this year, there will be a very big celebration. We pray that the celebration of this event will be an opportunity not only to look back, but also to celebrate togetherness, and to work today for a better future.
Transitions and Translation
Now that I have been talking about so much celebration, you may be wondering about whether I have been doing anything else! In the first part of the year 2010, I worked with each of the Bible Society translation teams, checking Sirach (deuterocanonical book), Esther, parts of Joshua, Judges, Jeremiah, Isaiah, and Psalms in several languages before the end of my contract with the Burkina Bible Society at the end of May. Since then, I have been on a little more relaxed schedule as Mennonite Church Canada and Burkina along with myself seek to discern my next direction in ministry.
In the meantime, various requests have come my way that involve me in the work I love to do most - in translation and linguistics. I have been asked to write a chapter in a book, to comment on several book drafts, and to help translate a book from English into French; all of these requests involve the domain on translation. I also have some of my own research projects which focus on the development of Old Testament translation resources in French. There is so much in English and so much on the New Testament, but I have yet to find a commentaries in French on the books of Jeremiah and Isaiah, just to give an example. Lately, also several students in linguistics and Bible translation have been soliciting me for help and feedback. And I continue to help out the Siamou translation  project(in the Orodara area) in various ways.
Daniel set up an office for me upstairs with air conditioning (when it gets too hot), with a view of numerous pretty birds just meters from my window (like the one pictured at the top of my letter!). It is so nice to work in my office at home at this point in time, interact with family members a little more, and simply have the time do errands and fuss around the house!  I just bought a 'new' car, a 3 door Rav4, which will allow me to better negociate the rough roads in and out of town! For the first time ever, a few weeks ago, I drove all the way from Ouaga to Kotoura and back (1000 km. round trip). Although it is more expensive, it gives me more freedom to visit people along the way, and to visit towns like Kotoura that have more limited public transportation.
In September, we will also be hosting a young Mennonite man from France who will be doing a three month service stint here in Burkina Faso (Ephraim Goldschmidt), and later in the month three men from Eastern Mennonite Missions living and working in Guinea Bissau and the Gambia will be coming to Burkina for a five-day conference. They found our name through the Mennonite your Way book. I will also be spending some time in Orodara working with the Siamou translation team.
I am thankful to God for this special time. I am thankful for the tasks that come my way, even though I do not know exactly what I will be doing in the months to come. We appreciate your prayers and support as we continue to look to Him to open doors and show the way.
Blessings to all of you and thanks again for your your support and prayers!
Anne Garber Kompaoré