These two months are full of great and wonderful things, full of greatly sad things. So this note will be necessarily short for now.

I just came back from a highly intense time teaching two classes of Biblical geography at the Bible Institute of Benin this past week*. At the end of the weekend course, the 10 year old daughter of the caretakers of the building came up to me and said she had some questions. But she let me have my afternoon nap first. After the nap, I went downstairs and here she had a notebook full of notes from my lectures!  She had some very specific questions of a few things she had not quite picked up. I was just amazed. That was probably the most touching compliment that I received the entire week - and that from an uncounted but very attentive participant! There were about 60-70 students in each class. Thankfully there was no grading to do!   At the end of the first class, the women expressly requested a photo with me. Each class had about half a dozen women each. And thanks to my Dad who had scanned all my Israel photos that I had taken in 1997-98! 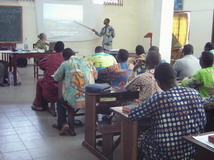 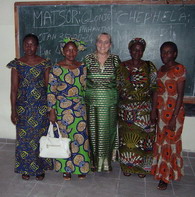 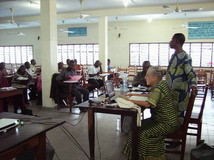 Teaching with the help of an interpreter translating into the Gun language.
But while I was there in Benin I learned of the passing of my daughter in law, Thérèse who lived in France. The body is to be brought to Burkina on Thursday, and the funeral will be on Saturday, Nov.19. Pray especially for the children Haniel (19) and Anita (14) and their father, Francis, Daniel's son, as well as their extended families.
On the same day that I received news about Thérèse, I also learned that my Dad suffered a small stroke. At the latest news, I hear he is already making a comeback being very diligent with his exercises!
I also shared with you a few weeks ago  the passing of Esther Traoré, the daughter of Musa, the Sicite translator. Well, she passed away on a Sunday, and 4 days later her mother gave birth to a little girl! They have named her Gloria. How can one be so terribly sad and then then happy so soon afterwards?  Mother and daughter are both in good health.
Next week I will be checking the translation of selections of Exodus with the Siamou translation team from Orodara. Thankfully they will be coming to work with me at my office at home in Ouaga!  And the two weeks after, I will be attending a translation consultant workshop also here in Ouaga, at the SIL centre. It will be nice not to have to travel anywhere for a little while!  I praise God for the opportunity  to be a part of both events, as they are activities that deal with Bible translation, a ministry that gives me special joy to serve in.
In the next news update, I hope to share a little more about the rich time that I had at the Ten Commandments workshop that I held in Orodara for our Mennonite translators, as well as about the several Sicite towns that I visited when I was there in October. And maybe Daniel can contribute a bit too!
Thank you for your prayers and support. I do need to make a correction. At this point of time, U.S. contributions are NOT tax-deductible after all, contrary to what I had said earlier. I was told that they hope to get something in place by the end of the year that will allow U.S. donors to receive tax - deductible receipts. You can still give online, though. As of October, I have been receiving approximately 1/10th of my targeted monthly support level. Fortunately so far, most work expenses have been covered by those who sollicited my help. Support goes up a bit each month, and for that I am thankful!
Blessings,
Anne and Daniel Kompaoré
Commission to Every Nation Canada, Associate International Partner with Mennonite Mission Network USA

All Canadian contributions are tax-deductible.
* Thanks to Mennonite Church Canada for providing the travel expenses for this visit, and to the Bible Institute of Benin for treating me like a queen while I was there and giving me a gift when I left!