This time around Daniel will be sharing about how God is working in the Apostolic Mission Church. The AMC began as an independent church in 1959, as a result of a difference of opinion between Pastors at the Assemblies of God Church in Ouagadougou. It was the first African Initiated* Church in Burkina Faso (then Upper Volta). Since Daniel's father, first ordained Pastor of the country, was one of the founding pastors. Daniel himself was plunged into the development of this fledging denomination (in 1960) since his early 20's. He was one of the few people who knew French, and then English, who could communicate to the outside world. Initially marginalized by the larger mission-founded denominations, the church grew and finally acquired membership with the Federation of Evangelical Churches and Missions in November 1990. Daniel, meanwhile, worked behind the scenes making contacts and promoting the Biblical training of young men, putting together a hymnbook in his language (Moore), as well as spear-heading the establishment of a primary and a secondary school next to the founding church. Working for the government, Daniel contented himself with Bible correspondence courses, first with ELWA and Moody Bible Institute (1964) and special training sessions such as Haggai Institute, and private study. He is a founding member of the National Association of Bible Translation and Literacy. Since his retirement (at age 55), he has thrown himself into full-time church work, building up his church plant in a new suburb of Ouagadougou, and since 2008 as President of his denomination, which now numbers 150 churches.

Here in Daniel's words (and a few slight additions from me :) are some highlights of 2011, as well as perspectives for 2012:

The year 2011 has gone with its ups and downs. We encountered the downfall of the two long walls of our new church building the very day the roof was to be put on. What a draw back for us! It came at a time when we were pressed to evacuate the class room in which we were worshiping so that the new students would start their classes. A big strong wind not only blew the walls down but also severely damaged the roof of the office of our Compassion International program for the neighbourhood children.

In everything, we give thanks to God! Although we had no idea where help would come for us to rebuild the broken wall and put on a new roof for our office, we prayed and thanked God because there were no injuries.

Step by step, bit by bit, with the help of family and friends, the walls of the church building rose up and up and the roof was put on. Guess what, on the second of October, by the grace of God we were able to have our first Sunday service in our new building even though there were no windows or doors. The service lasted three good hours. The children were just remarkable in their Sunday school, their songs and sketches. The women were not at rest, they sang sweet melodies to the glory of God and danced between the platform and the congregation. Moving testimonies and prayers were offered to our Almighty God. 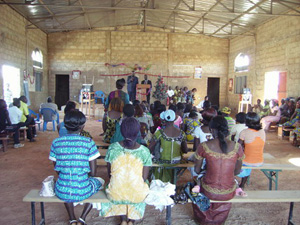 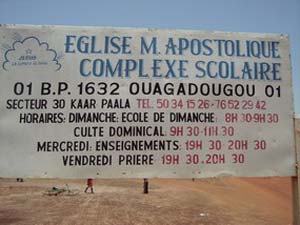 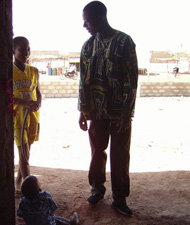 Our church plant in the outskirts of Ouagadougou now has six Primary school classes with 173 students. Our vision is to build and open a secondary school for our primary school's children. Our other children's program in conjunction with Compassion International is serving 250 Children and their parents. It is a great opportunity for us to present God's word to those young souls.

Our primary school with the Compassion office in the background.

The year 2012 is here! Praise God! After a round of well-wishing for the New year from friends and fellow church members, we had a month of January packed full with activities. Jan 9-13, Anne taught Biblical Geography at our rural Bible school in Gonse just outside of Ouaga. It was quite an exciting challenge for her as some of her students were learning how to read maps for the first time. She also was quite impressed with the wives of the students who would come everyday to sit and listen to the lectures at the back of the classroom holding their children on their laps. All this inspite of the fact that they do not even know how to read and they are not enrolled in the courses! This inspires us to think about how we can provide training for our pastors' wives. 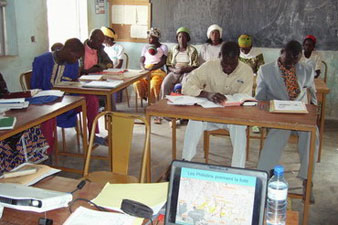 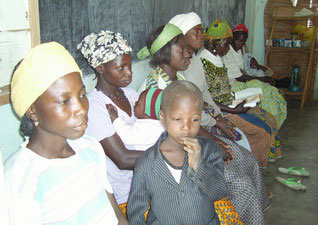 The next week it was the turn of myself and my fellow church workers to travel to conferences in two rural districts. Two pastors André Minoungou and Aimé Fréderic D. COMPAORE from Ouagadougou along with three sisters in the Lord went to the conference in the Zoundweogo area, held at Boura down south of Ouagadougou . The church building was packed full. Two thirds were women. The teachings centered on Luke 6:38 'Give, and it will be given to you. A good measure, pressed down, shaken together and running over, will be poured into your lap. For with the measure you use, it will be measured to you', and Malachi 3. People were deeply moved and Gods showered his blessing upon all. Greatly encouraged, the women's group clamored for more decentralized teachings for their spiritual growth

I was accompanied by 2 pastors and a brother in charge of intercession to the Conference for all Christians in the Boulkiemde area, held at Kalpè up north of Ouagadougou .. The topic was based on Proverbs 6:6 '6Take a lesson from the ants, you lazybones. Learn from their ways and be wise! 7Even though they have no prince, governor, or ruler to make them work, 8they labor hard all summer, gathering food for the winter.' The teaching emphasized the necessity of God's people to move away from laziness both physical and spiritual and sincerely serve God with all our might. People came from four different provinces and we were richly blessed. The spirit of unity and togetherness moved through all those activities and it was interesting to note that denominational barriers are being dismantled.

To top off the month of January was the celebration of the 50th anniversary of the Burkina Evangelical Federation of Churches and Missions (FEME). There was an interdenominational mass evangelism campaign during the week in collaboration with international evangelist Daniel Kolenda. On Saturday, Anne and I attended the final celebration at our large football stadium in Ouagadougou along with about 15,000 other people from 13 different denominations, listening to wonderful music, watching fascinating choreographics (which included horses!), and praying together. The final hymn sung by the 2000 person choir was 'How Great Thou Art'.

Our plans for the near future, as God provides, include:

Thank-you for your prayers as we look ahead to the coming year, living each day at a time for our wonderful Lord and Saviour! Pray for the spiritual growth of all the members of the Apostolic Mission Church, for the building up and training of the leaders, both men and women, for growing congregrations and church plants, and for those of us who are involved with the the leadership and visioning for the future of the church. 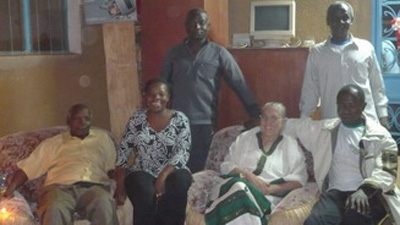 Anne again: Daniel and I will be coming to North America in August of this year. Daniel will be staying until our CTEN orientation (inTexas!) in September, and then returning to Burkina. I will be staying for the month of October and maybe November visiting friends and churches, sharing what God is doing in Burkina. If you would like to have us speak at your church, or to share with a group of friends, do contact us early so we can organize our schedule. We plan to base in the Listowel (Southern Ontario) area, but also hope (Anne) to visit New Orleans and Pennsylvania and maybe elsewhere depending on invitations.

We pray that you all will have a wonderful year 2012!

*African Initiated Churches are churches that were started by Africans themselves independently of Western mission efforts. Mennonite Mission Network has worked with African Initiated Churches in various parts of Africa over the years - notably in southern Africa, Ivory Coast, Benin, Ghana, and Nigeria. In the last number of years, there has been an mushrooming growth of the number of independent churches in Burkina as well as in many countries in Africa, with varying theological orientations.

All Canadian AND American donations are now tax-deductible.
For Financial information and status please see CurrentFinancialStatus.pdf or contact Anne.