The Joys and Griefs of Christmas 2008 - What of 2009?
Anne Garber Kompaoré
Skype contact: annegk1, Personal website: http://www.aegk.finespun.net
It all happened on Christmas eve here in Burkina.
As my sister Ruth said in her newsletter a few days ago - there is really something special in seeing Christmas through the eyes of a child. In my case, Daniel Traoré is a young adult from Kotoura (the late Cheba's son) experiencing a Christmas eve worship service - or maybe we should say concert - Ouaga style for the first time. At the main Apostolic Mission church, the band was out in full force, the young people made up about three quarters of congregation, and from 9pm to midnight there was constant singing and dancing except for a small interval where the pastor slipped in a sermon.  Several choirs gave their numbers; there was a funny play about not asking your parents too much for Christmas - the Daddy in the play ended up in jail because he took out a loan he could not pay back in order to please the demands of his children. A male - 2 female trio provided beautiful rhythmic harmony of a variety of tunes originating from Burkina, South Africa, and North America, including 'Because He lives, I can face tomorrow, ... because I know He holds the future...'  translated into the Moore language.

And of course the evening would not have been complete without the current Christian hit song of Ouagadougou (in French): I am full of joy, oh such great joy, I am overwhelmed with emotion because Yahweh has liberated me. As the volume increases and the beat picks up, the women get up and begin dancing down the aisles, and the young men literally run down the aisles in exuberation of the proclamation of the good news. Sorry not much in the way of traditional Christmas tunes! Then the songs slowed down to a time of more sober worship and contemplation before the final meditation of the evening.

Daniel was just thrilled by the evening. A little different from the Mennonite Christmas celebrations in Kotoura and Orodara!
At the same time, on Christmas eve, Father John of the Cross Hien, breathed his last breath, after an agonizing two day respiratory illness. I learned of his passing at the end of a long and busy Christmas day, and decided to join the Bible Society director in the 4 hour drive on Dec. 26 to Diebougou for the funeral. Ever since his ordination as priest in 1997, Father John had been dedicated to the translation of the Bible into the Dagara language. Last year they dedicated the publication of the New Testament, and this year they were about two thirds of the way through the Old Testament. Father John was the coordinator of the project and the only one who was competent with the Bible translation software that is now used for facilitating the task.  So his presence will be sorely missed. He was only 39 years old. 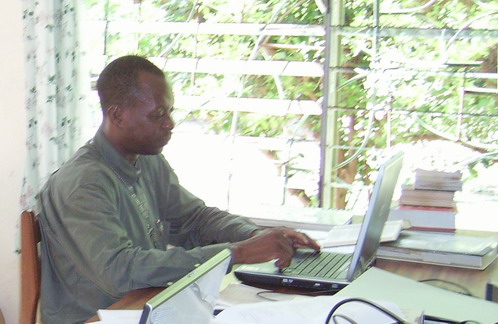 Father John of the Cross

Isaiah 30:21 Whether you turn to the right or to the left,

your ears will hear a voice behind you, saying, "This is the way; walk in it." NIB

When I sent out correspondence to the different translation teams concerning plans for 2009, I included the above verse.

The tragic passing of Father John gives much pause for reflection as we move into 2009. Father John had faithfully submitted a very full schedule of activity for 2009, just a few short weeks before his death. There is no doubt now that the team will not be able to accomplish all of those plans this year. Suddenly all those well laid plans are cast aside, and we have so many question marks about how the Dagara work will move ahead.
My own schedule appears to be more than full for this coming year. I am not sure I will be able to accomplish everything that there is to do. But I seek to serve God faithfully and to do only that which He gives me the strength and energy to do!
May our great God also direct and lead you daily giving you strength and joy in all that you do during this coming year.
Blessings,
Anne Garber Kompaoré